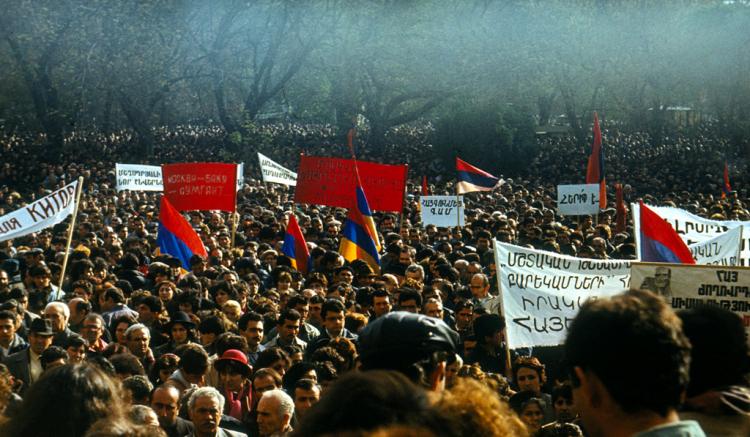 The Institute of Archaeology and Ethnography of National Academy of Sciences of Armenia organizes the international conference “The Karabagh Movement: 30 Years Later (History, Reconsideration, and Lessons),” which will take place on September 10-12, 2018.

The policy of “Democratization, Perestroika, and Glasnost” proclaimed by the leaders of the Communist Party of the former Soviet Union in the mid 1980s was manifested by and gave birth to the national-democratic Karabagh Movement in Armenia a few years later, in 1988-1990. The result of this particular interpretation of the new Soviet tenets by Armenians could be defined as an “Armenian Revolution,” since it brought radical transformations in the political and socio-economic life of the society.

The Movement was inspired by the desire of people of the Nagorno (Mountainous) Karabagh Autonomous Region of the Soviet Republic of Azerbaijan, mostly populated with Armenians, to secede from the latter and to unite with the Soviet Republic of Armenia. The main justification put forth for this secession consisted in the perceived historical injustice relating to the decision made, under Stalin’s pressure, by the Caucasian Regional Committee of the Russian Communist Party in 1921, that refused the request by the Soviet Republic of Armenia to integrate Karabagh within its borders because of the overwhelming high percentage (96%) of the Armenian population in that region. In February 1988, mass rallies (that led to what was referred to as the “Karabagh Movement”: February 1988 – August 1990) began in Yerevan involving wide strata of Armenian society.

An examination of the Movement suggests that the Nagorno-Karabagh self-determination issue, initially proclaimed as the main political objective of the Movement, often served as a background that revealed many other problems of vital importance troubling Armenian society. Gradually, the Movement became both an instrument and a motivating force to search for solutions to these societal problems.

Karabagh Movement from the beginning to the end was directed from “below.”  Therefore, from the very first days of its birth, the Movement was labeled as an obstacle for perestroika, and got punches of the Soviet leadership.

Its most important characteristics were peaceful, constitutional means and methods of the struggle adopted by the Movement from the very beginning. Since February 1988, main types of civil disobedience, protest and demands were peaceful non-violent rallies with different slogans but without any clashes with police, as well as sit-down strikes and hunger-strikes. Parliament elections of May-June 1990 were the peak of the effectiveness of constitutional struggle. As a result, non-communists were the majority in the parliament. On August 23, 1990 the “Declaration of Independence” was adopted and this was the beginning of an independent, democratic nation building.

Unlike Baltic states, where the movements from the very beginning were aimed at gaining independence, the anti-soviet moods in Armenia increased gradually. This is another indication that the Karabagh Movement was directed from “below.” During the Movement the process of re-assessment of the past and present has also started. This was manifested in realizing the value of people’s joint will, increased reliance on the possibility of independent action, shook the trust towards centuries of history perceiving Russians as saviors of Armenians, realization of the need to fight against Russian cultural assimilation and in other identity changes. So, the ideas conditioned with external and internal factors, conceived from the ground up, maturing gradually, step by step were gaining nation-wide coverage.

At the conference, the following issues are supposed to be discussed:

1. The Movement in Armenia and in Karabagh (e.g. the process of shaping, constituents, forms of representation, ecological movement, constitutional groups, etc.).

4. The Movement in Yerevan, Stepanakert, and in the regions.

5. “… and next to it” (e.g. Kremlin/Gorbachev and the Karabagh Movement, Azerbaijani reflections to the Movement).

6. The Movement in the context of other democratic movements in the USSR and of the Eastern-European revolutions.

8. The Movement and the collapse of the USSR: a consequence or regularity?

Deadline for presenting proposals is April 10, 2018. Proposals, including brief bio data, contact details (name, surname, affiliation, title), title of the paper and summary up to 300 words should be sent at hmarutyan@yahoo.com.

Authors of the proposals will be informed additionally until April 30, 2018. Priority will be given to analytical rather than descriptive proposals. Deadline for presenting papers is July 2, 2018. Papers presented at the conference and approved by the organizing committee will be published in the proceedings of the conference. For additional information address to the Institute of Archaeology & Ethnography, Academy of Sciences of Armenia (15 Charents St., 0025, Yerevan, Armenia), Harutyun Marutyan: e-mail hmarutyan@yahoo.com, tel. +374 10 55 67 97 (work), +374 91 65 86 76, +374 77 65 86 76 (cell).

The organizational committee of the conference will not cover travel expenses, but will help in accommodation for participants from abroad.

Zooming the City։ An Anthropological Perspective